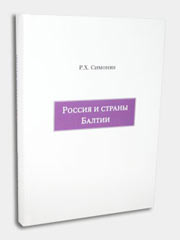 The economic crisis, which started out in 2008 in the USA. in the summer came to the Baltic countries, and in the autumn reached Russia as well. But crisis is a temporary phenomenon, and the geo-strategic interests of the Western Europe, as well as its interrelation with Russia, are constant. The monograph of the Director of the Russian-Baltic Centre of the Institute of Sociology of the Russian Academy of Sciences is devoted to the region, through which lies the boarder between the European Union and Russia and through which is conducted the main exchange of goods between them. Here are intertwined the historical, economic, political, ethno-cultural and psychological factors of interaction between two sub-civilizations — the West-Christian and the East-Christian. All these factors have been thoroughly examined in the book, which is issued as the third edition in Russian and the first edition in English language. The book, which has received about 50 such reviews in journals and newspapers of Russia, the Baltic countries, Byelorussia, Germany, Poland. Finland, France, the Czech Republic, will be useful for all, who are interested in the Baltic Sea region.

Vladimir Yadov. What is this book about? (Preface to the first edition)
Valerij Mansurov. The event in the scientific world (preface to second edition)
Ruslan Grinbreg. Consistent conceiving of the senses (preface to the 3rd edition)