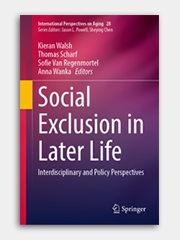 This chapter considers pension protection and social services in the post-Soviet space as forms of social policy that can protect older people from risks of social exclusion. We draw on the example of two countries, Russia and Ukraine, which share a common Soviet background. Until relatively recently, both countries held a similar position with regard to the pension protection and social security of old people. However, recent reforms in the area of ​​pensions and social services have generated various possible ways for the development of both countries. In Ukraine, pension reform took place in 2017, and can be described as “softer” in comparison with the Russian version. Ukrainian reform does not involve raising the retirement age, but rather increases the length of service required to retire. Pension reform in Russia has been taking place before our eyes, in 2018-19. It assumes a sharp rise in the retirement ages for men and women. In addition to addressing pension reform, the chapter considers in more detail social services for older people in Russia and Ukraine. In broad terms, the chapter seeks to answer the following question: How do modern pension reforms and the structure of social services in the post-Soviet space (for example, Russia and Ukraine) affect the social exclusion of older people?

7.5 Homelessness trends in ageing literature in the context of domains of social exclusion384
Nilufer Korkmaz-Yaylagul and Ahmet Melik Bas